The Ecosystem Academy Launches its First Edition in Amman 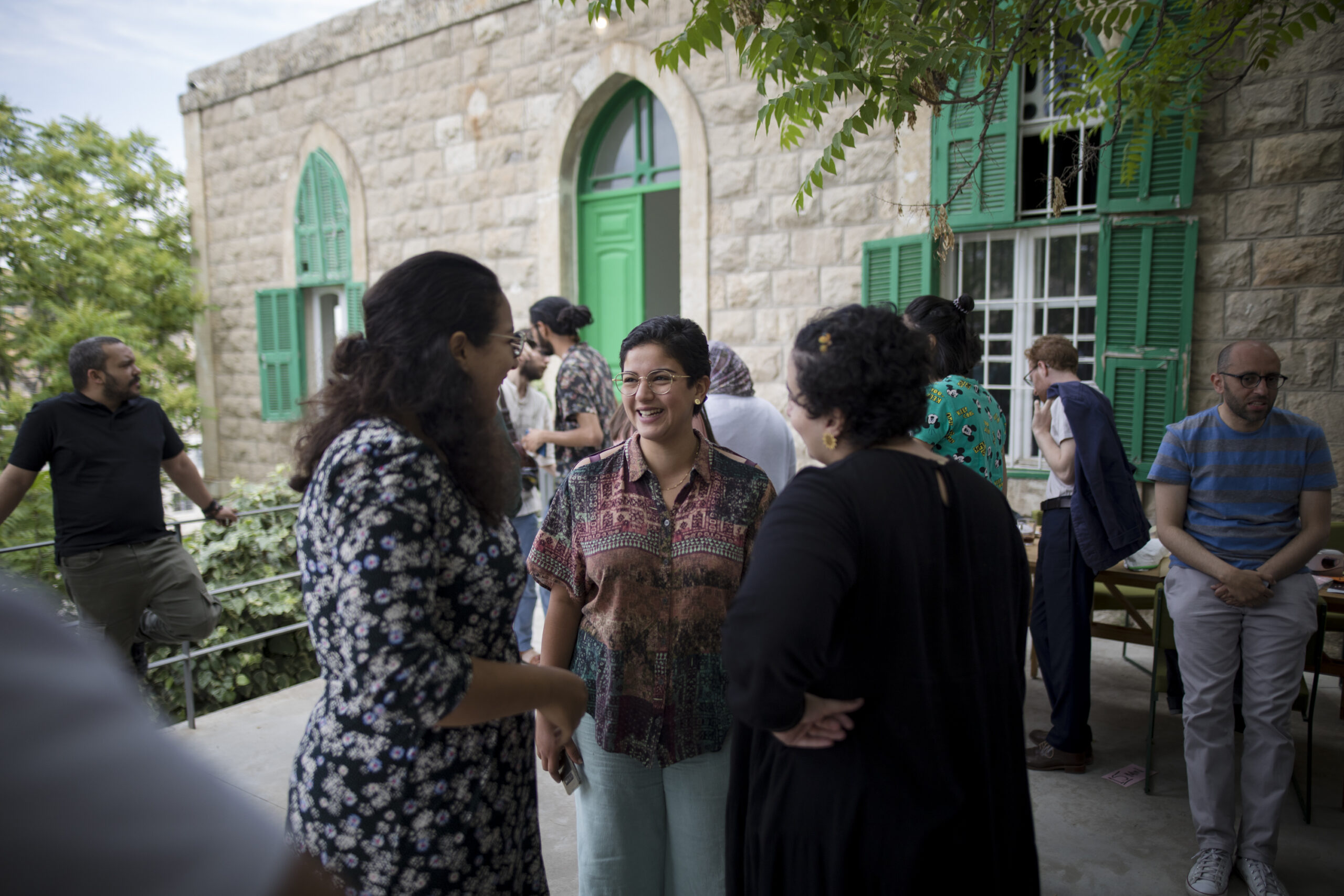 What happens if we think of everyone in this room as the ecosystem?

At the Mohammad and Mahera Abu Ghazaleh (MMAG) Foundation in Jabal Amman the terrace buzzes with the sound of over forty art and culture practitioners, collectives, institutions, youth-led initiatives and cultural alliances from the Southern Mediterranean region. Under the framework of the «Ecosystem Academy» implemented by MitOst, the team of All-Around Culture invited grantees from the «Youth-Led Cultural & Civic Initiatives» and «Cultural Alliances» components alongside enablers and facilitators to reflect on and map the cultural ecosystem of the region.

In the spirit of self-led organization, and under the smooth and energetic facilitation of Olha Kotska and Bhavesh Patel, the agenda of the three-day program followed methodologies that enable space for the attendees to shape, lead and direct the nature of the gathering. The open framework approach had attendees, some meeting for the very first time, setting the agenda priorities and convening sessions on everything from collective sustainability, to cultural entrepreneurship, and adaptability. The «Ecosystem Academy» aimed to carve out an ambitious and rare space where actors representing different positions in the cultural field were brought together. 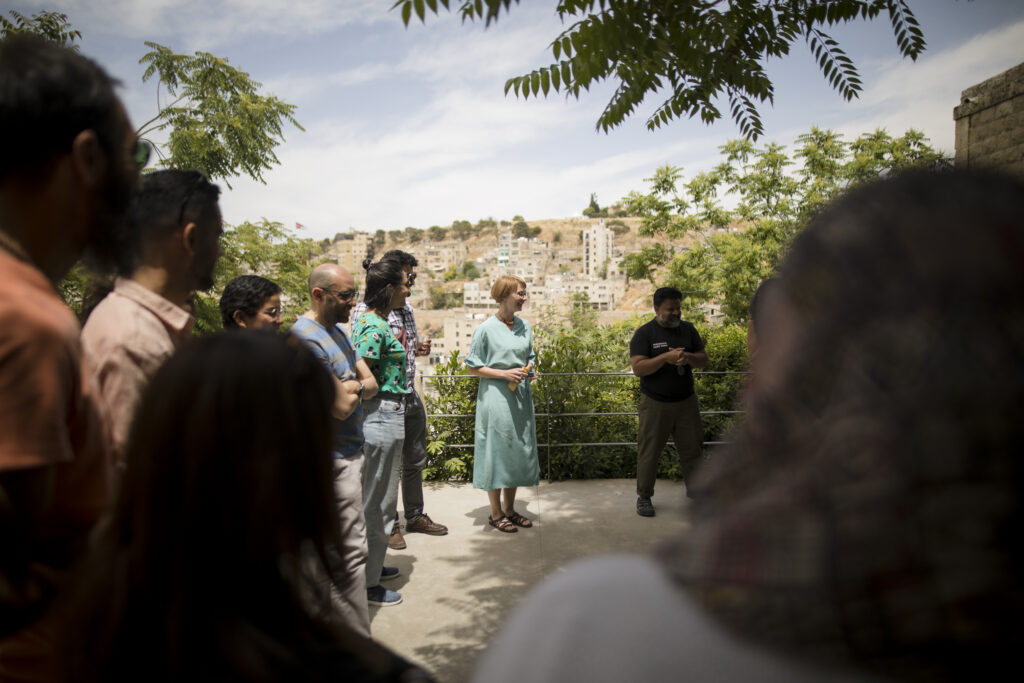 On the first day, the broader question bringing everyone together seemed to be: How do we see ourselves functioning, and maneuvering within our current cultural ecosystem? For some, this process of maneuvering is a constant negotiation through difficult compromises that demands a certain agility for adaptation to unforeseen circumstances. While for others, it seemed important to first learn more about each other’s ecosystems but also to pin down a common ground.

On the terrace Bhavesh introduced a group exercise that had everyone trying to group themselves in a triangle in relation to others around them. The exercise showcased how each individual is essential to the formation of a comprehensive ecosystem, which at times has gaps we are compelled to fill. Everyone left the exercise thinking about what it takes to move in tandem with the other moving nodes around us.

The different experiences, fields, positions and privileges represented, made visible the latent tension and occasional heated discussion in cultural work today. Perhaps it was the insistence of the facilitators for self organization, reflection and open forums that made the transformation of the question ‘what did “you” come here for’ to ‘what did “we” come here for’ possible towards the end of the program.

Diving deeper, attendees convened into groups and alliances to talk through frustrations around funding challenges, collapse of collectives, and a volatile political climate. In one of the open sessions, it became clear that the conversation on sustainability of cultural projects meant that practitioners were compelled to be agile in who and how they partner and collaborate with other actors in their network. While for others it meant, the ability to devise clever and adaptable methodologies to carry out field research in a volatile socioeconomic and political context. In another session convened on the financial sustainability of cultural industries, it became quite impossible to maneuver past the impact that massive funding cuts aggravated by the COVID-19 pandemic had on people working in theater, circus, and performing arts. 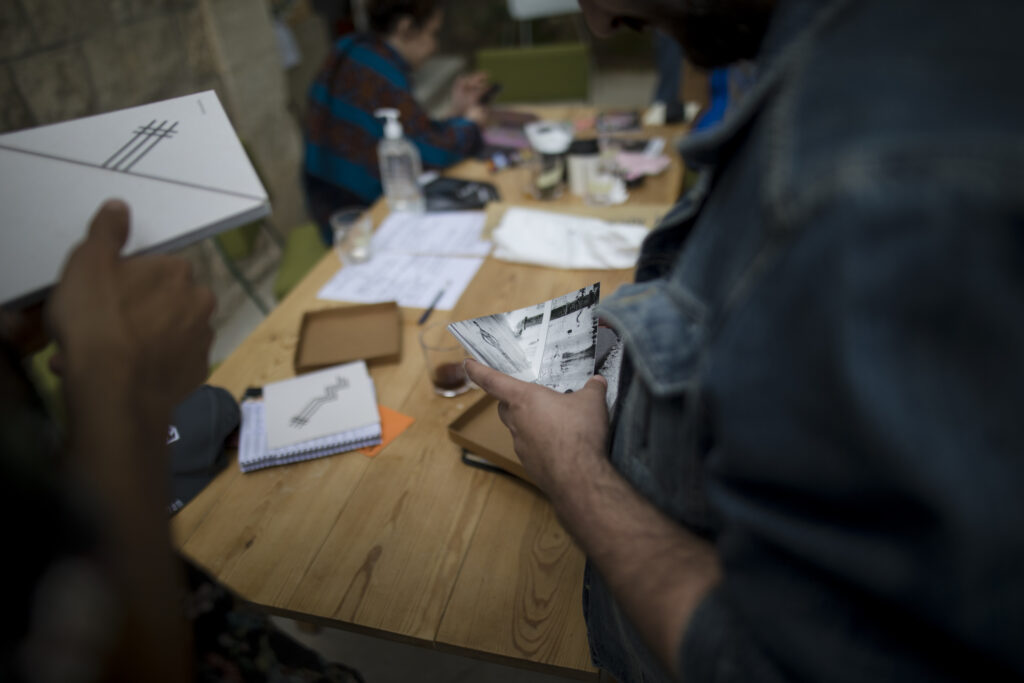 With a mix of visits to artist studios, collectives and institutions in Amman the attendees put to practice their theories, topics, and questions on self-organization, and artistic practices. Participants were introduced to eight local artists currently in residence at MMAG Foundation’s Self-Led residency program working across mediums such as glass-making, painting, filmmaking, sound, analogue photography, and sculpture. The intimate visits became a rare opportunity for conversations and connections between practitioners with similar artistic practices, but working in different contexts, to meet and exchange their work and experiences.

Whether during sessions of the day, or in the passionate conversations that sprung up over lunch, the imagination of some form of ecosystem had already begun to develop. Attendees built on this by visualizing and documenting their own local networks, thinking through or further developing their existing connections and collaborations. Beyond these connections, partners and contexts, everyone brought into the gathering, this newly formed ecosystem allowed for a different composition to occur with the different attendees and their respective cultural projects.

The site visits to local art institutions and community spaces nearby such as Jadal, Turbo Design Studio, Darat Al Funun and the Jordan National Gallery on the second day gave participants a glimpse of the workings of the Jordanian cultural ecosystem. It became another way to think about the different topics and possible interventions that would feed into action plans and discussions initiated during the open sessions.

On the second day, new sessions brought up new questions that either had not been brought up yet, or became important opportunities to be able to step back and reflect. Sessions led by attendees the previous day were facilitated by different people.  This approach offered new ways to look at the same topics from different angles. Moving between documenting art practices, social enterprise as a way to secure financial sustainability, navigating the maze of foreign and regional funding, to thinking about the resilience and adaptability of cultural initiatives in the region.

With some sessions sidestepping their initial purpose, the day’s activities became an important exercise in storming and norming.  Nothing showcased the tempo of the day better than other exercises facilitated by Bhavesh that had attendees roaming the hall with one attendee blindfolded attempting to make it to the chair on the other side of the room. The plot twist came on the third attempt to cross the room where the chair had now been removed. Each of us witnessed firsthand the metaphorical trials and tribulations of juggling and sometimes dodging the different challenges and shocks that confront us. 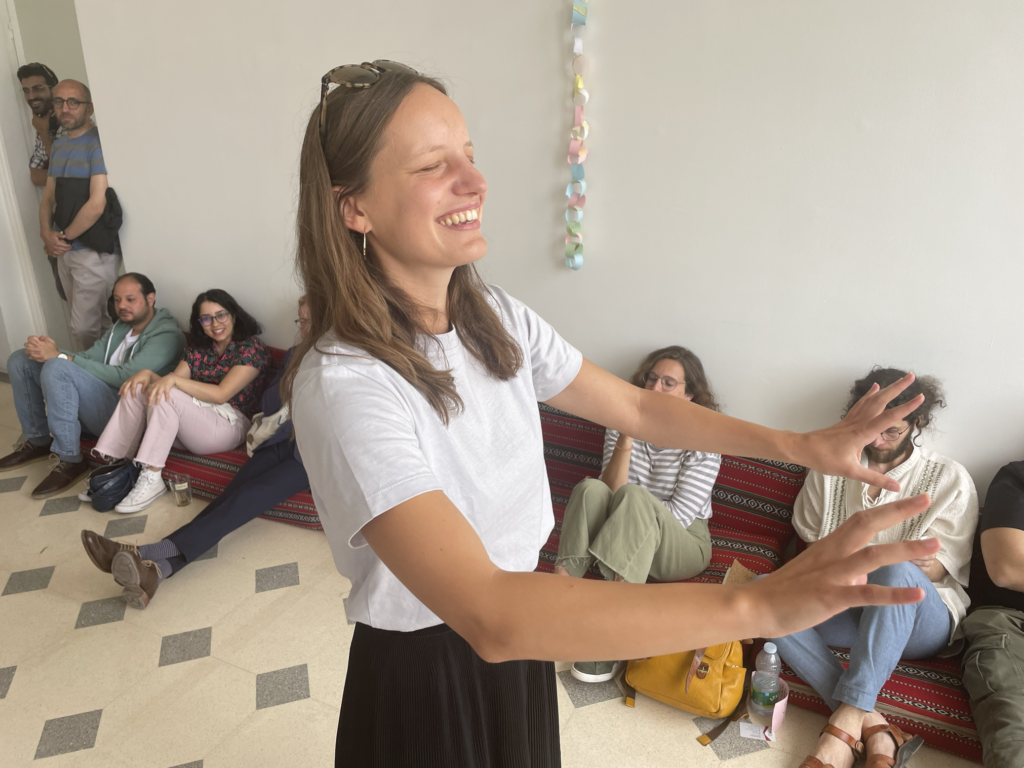 In the heat of trying to define, pin down, and negotiate what the ecosystem is, it became important every now and then to be reminded of the centrality of artistic practice in the work of collectives and institutions alike. Aboud Rawajbeh’s intervention to host a screening of ‘Talking about Trees’ by Sudenese director Suhaib Gasmelbari elicited essential insights and questions on what it means to gather, and produce in highly surveilled and politically repressive contexts.  Bringing the group back to asking questions on self-organization and the important role it plays in subverting power structures. The screening also managed to bring about something yet to be articulated so fluently in the gathering. The persistent and almost stubborn practice of insisting on the presence of cultural activities as a ground up approach.

With the «Ecosystem Academy» coming to close, the energy on the third day had slightly shifted. The buzz was back and it felt like there was a certain harmony. The question of the day was quite simply, what would be done with all that was learned, discussed, and contested. Attendees moved from defining individually their own questions, action points, and interventions to doing so in pairs and then in groups.

It became clear that structural changes such as health insurance for freelance artists, registration as for profit initiatives, and lobbying for greater mobility in the region, was at the forefront for many. Especially since some in the gathering faced difficulty on entry to Jordan from neighboring Arab countries. On the other hand, partnerships and ensuring lasting connections between practitioners working in similar fields and topics was also of importance. For some, it was more about developing and experimenting with different artistic practices and approaches to enrich cultural initiatives. 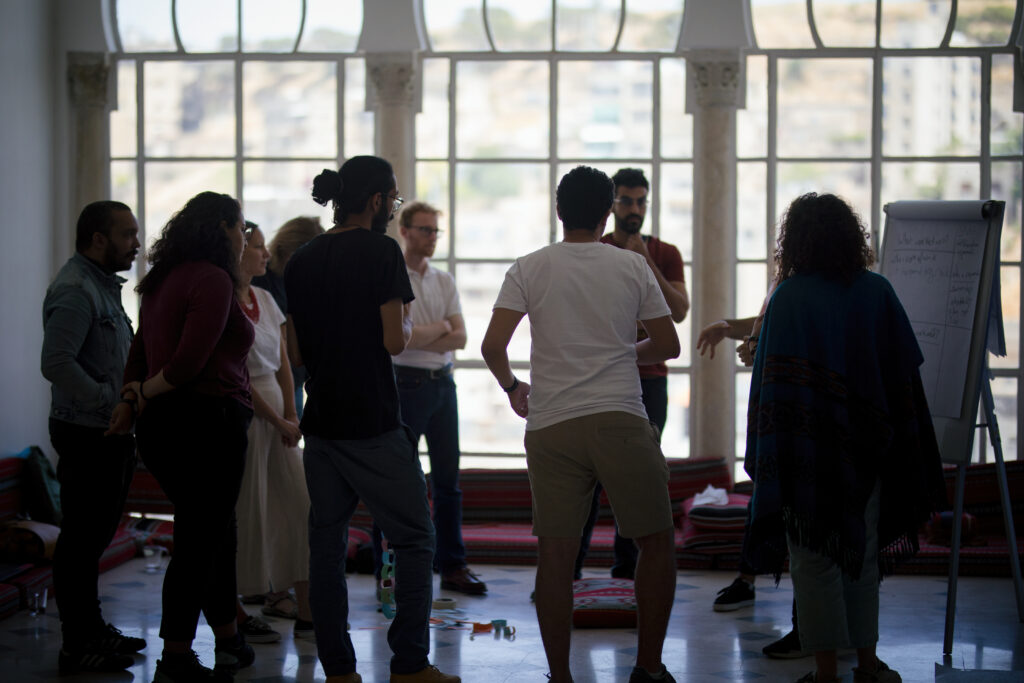 In the final open sessions convened, attendees rushed to revise, and add to the sessions of the day before, now turning discussions into action plans and strategies. With everyone gathered, flip chart paper and markers in hand, it became a matter of time before next steps were outlined, emails were exchanged, and facebook groups were initiated.  The sessions ended with plans for developing a tool to document artistic and cultural practices across the region, initiating a gathering every three months on financial sustainability,  and a proposal with different strategies to maintain and build audiences. 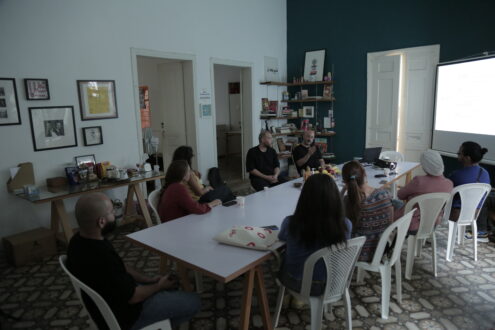 The five-day regional workshop, organized by Culture Resource (Al-Mawred Al-Thaqafy), for the “Cultural Alliances” component of the All-Around Culture program.... 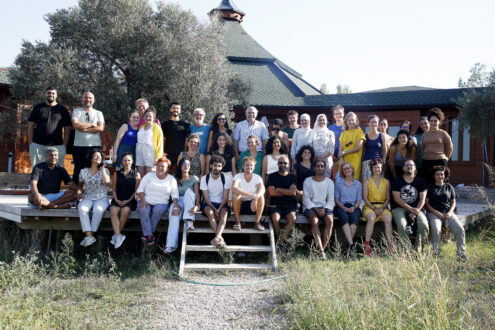 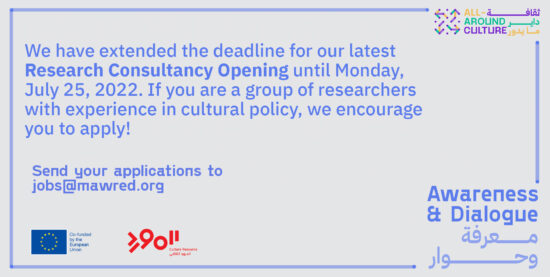 Open to applicants from the Arab Region.